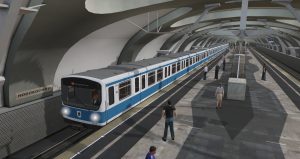 The Type B trains were introduced by the Munich U-Bahn in the early 1980s to provide new rolling stock for the then under-construction extensions to the network, such as the new trunk line from Scheideplatz to Innsbrucker Ring and Neuperlach Süd (the current U1/U2 common section and the south-eastern end of Line U5).

At the time, the Munich U-Bahn only had one class of train in service, the Type A, wich the network had used since it’s opening in 1971. Depsite their design being rather modern for the time they were introduced, and still perfectly adequate for the services they were performing, by the late 1970s traction technology had evolved greatly, rendering many components that Type A trains used rather obsolete in comparison.

Designated as the “Type B”, a first batch of six 2-car sets (to be formed as two 6-car sets in regular service) was manufactured by MBB and delivered for testing in 1981.

The new Type B inherited several fetaures from the older Type A trains, namely the bodyshell, doors, interiors, bogeys and general arrangment. The main difference was that the new trains were fitted with a VCVF control system (a system akin to a chopper wich controls three-phase AC motors instead of conventional DC brushed ones, something developed by Siemens and AEG and that had been first used on some of Nuremberg’s DT1 Series trains, technically identical and derived from Munich’s Type As), resulting in a smoother accelleration, a greater comfort and a considerable reduction in energy consumption. A few other improvements were also made – the cab was completely redesigned, with a more comfortable driving stand and a large single front window for better visibility; the passenger doors still remained of the semi-automatic type, however, this time pulling one handle now opened both doors, as opposed to only opening the one on it’s relative side (as was on the Type As). The interiors also kept their classy wood-like paneling, with the only change made being in the color of the upholstery: changed from blue to brown.

The livery was also changed, now a white background with mid-height and above-the-windows blue bands, as opposed to the white-cream window band on a blue background of the older trains

The new trains performed rather well during testing, however they unfortunately suffered from some reliability issues – the VCVF technology was still rather new and in need of a fine-tuning, meaning that deliveries of full-production Type B trains had to be postponed to a later date, with the Munich U-Bahn opting for the time being to purchase a final batch of Type A trains (wich were delivered in 1983) as they were in urgent need of new rolling stock for the new lines. The two Type B prototypes were retained and used for further testing and as spare trains in regular service.

Finally, five years after the delivery of the prototypes, the Munich U-Bahn placed an order for 35 two-car Type B sets in 1986. Built by MBB and MAN, the new trains were delivered in 1988, just in time for the opening of the Line U4 extension to Arabellapark and the opening of Line U5 from Neuperlach Zentrum to Laimer Platz, integrating the existing Line U4 section (opened in 1984) between Karlsplatz and Westendstrasse and thus forming the third “trunk line” of the Munich U-Bahn.

A further batch of 22 2-car sets was delivered in 1994, this time to cover the Line U6 southwards extension to Klinikum Großhadern and the northwards one to Garching-Hochbrück and the U2 extension to Dülferstraße and Feldmoching. This batch was built between 1994 and 1995 by MBB and MAN togheter with DWA of Bautzen, in the former GDR.

All three batches are more or less identical, differing little from each other, with the only notable change being on the last batch: the replacement of the fancy solari board-style destination indicator in favour of a more modern (but rather dull) dot-matrix one. The six prototype 2-car sets were also initially incompatible with the full-production trains due to some differences in the electrical equipment. This was solved in 1995 with the prototype sets being modified and adapted to full-production standards, ending compatibility issues.

In 2006, one of the two prototype sets, No. 498, was bought by siemens and transofrmed into a test bed for it’s new “Syntegra” direct-drive system and bogeys (similar direct-drive systems were also being experimented on in France, and more famously in Japan, with the experimental E331 Series set, introduced in 2007 on the Keiyo Line). Initially moved to Siemens’ test centre in Wildenrath (North-Rhine Westphalia), the experimental Syntegra set was later returned to Munich, undergoing further testing at the U-Bahn Fröttmaning depot, before being approved and entering regular revenue services on the 12th of August 2008, sandwitched in the middle of a six-car formation and serving primarily Line U6 (altough it was also used on other lines as well). Following the discontinuation of the program by Siemens in 2018, the Syntegra set was retired from service due to the lack of available spare parts and donated to a cultural center in Munich, where they are currently used (togheter with some Type A cars) as outdoor decor.

Beisdes the Syntegra set, as of today only six other 2-car sets have been retired (due to serious faults or damages), for a total of 57 2-car sets still in service out of 63 built. Depsite the introduction of the new Type C and C2 trains, MVG has no detailed plan for an immediate replacement for the Type Bs as the far older Type As have the priority, altough the company does have some broad intentions for a fleet replacement by the 2030s.

One of the retired 2-car sets is prototype set 497, whose front quarter (the cab section and part of the passenger compartment) of wich has been preserved and it’s now on display in the MVG museum, having been converted to a simulator playable by the general pubblic.

Bonus video:
Like for the Type As, here’s a Youtube video from MVG’s official channel exploring the Type B trains and their fetaures.