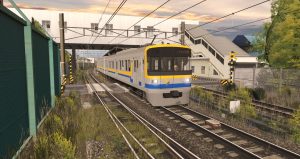 Ever since it’s opening in 1967, the Kodomonokuni Line had been operated with whatever rolling stock Tokyu could source. This included the various pre-war, war-time and immediately-post-war-made batches of the 3000 Series, the old green frog 5000 Series, the 6000 Series and even the prototypes of the 7200 Series. Starting from 1989, the line was assigned for the first time a “regular” train, under the form of a 2-car 7000 Series set, fitted in a dedicated livery, surplus from the Toyoko Line.

However, a lone set wasn’t enough to cover the unpredictably varying ridership of the line, with Tokyu being often forced to run additional services with 5-car trains (mostly 8000 Series sets) borrowed from the Oimachi Line.
Finally, in the late 1990s, after the 1997 Kodomonokuni Line right-of-way ownership transfer from the Kodomonokuni Theme Park managing company to Yokohama Minatomirai Railway*, the new owner decided it was time for the Kodomonokuni Line to get it’s own dedicated rolling stock.

Designated as the Y000 Series, the new Kodomonokuni Line trains were based on Tokyu’s then-newest design, the 3000 Series for trough-services between the Meguro Line and the Namboku and Mita subway lines. As a matter of cost reduction,
it was deiced that the new trains were actually to re-use as much components as possible from the 3000 Series, hence they were built with the same technical equipment (bogeys, traction inverters, pantographs, driving desks and so on), the same doors, the same air-conditioning units, the same seating and even the same FRP front mask, basically unchanged from the 3000 Series one.

However the entire arrangment of the train had to been reworked since the Kodomonokuni Line normally has a “manageable” ridership: the Y000 Series was built with three doors per side and as a two-car formations, with two single-arm pantographs being fitted on the roof of one car.

Obviously manufactured by Tokyu Car, an order for three 2-car sets was placed in early 1999, with the first set being delivered and entering service in August of the same year, followed by the other two in December.

Currently, all three sets are still in service, assigned to Tokyu’s Nagatsuta Depot (wich is located at mid-point on the Kodomonokuni Line**) – normally two trains are used on the line during the morning and evening rush hours (as over time the Kodomonokuni Line has begun to serve also as a commuter feeder for the Denentoshi Line, rather than being only an amusement park shuttle) and one train is used during off-peak hours and holidays.
Normally the Y000 Series operates in 2-car sets, but during times of high ridership 4-car sets (two coupled sets) aren’t unheard of. Also during times of high ridership, the three Y000 Series are being increasingly supplemented and assisted by 7000 Series 3-car sets borrowed from the Ikegami and Tamagawa Lines, depsite this (and the fact that the three sets are now 20 years old), there are no definitive plans to replace the Y000 Series.

Trivia:
The Y000 Series bears the distinction of being one of the very last, if not the lastest, 20m-long type electric multiple units with three doors per car side to be purchased by (or more precisely, purchased on behalf of) a major private company of the Tokyo area. Once popular (Seibu railway had been a very prolific user), this arrangment had fell out of use in the 1970s and 1980s in favour of the 4-door design.

*While the Kodomonokuni Line infrastructure and rolling stock are owned by the Yokohama Minatomirai Railway, all the operations and staffing of the line is done by Tokyu (and the company also has the final saying in almost anything).
Thus, depsite the different ownership, the Kodomonokuni Line operates de facto as a Tokyu line.

**The Kodomonokuni Line isn’t only used to shuttle theme park visitors and commuters – it’s other, perhaps even more vital function, is to act as a connector between Tokyu’s large Nagatsuta works, where major overhauls are done, and the rest of Tokyu’s network.