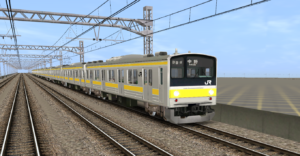 Originally, the 201 Series was intended to replace the ageing 101 and 103 Series trains on the Chuo-Sobu Line, but as 201 Series production stopped in 1983, the goal wasn’t achieved.
JR East sought to continue the replacement of the 103 Series; 205 Series trains were introduced in August 1989, picking up where the 201 series left, but as there were lots of other heavily used lines in desperate need of new rolling stock, 205 Series introduction was diverted to those other lines. Thus, not even the 205s managed to replace the 103s.