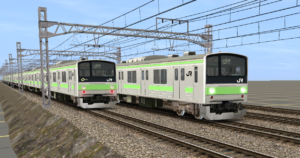 If the 201 series (and the JNR as a whole) with all their efforts weren’t to find a solution to the company’s debt problems, the government would: by privatization.

Therefore a commission ugently met to discuss a new way of saving money.
The problem of the 201 series was it’s expensive control system so it was decided to go back to the resistor control, albeit improved with an additional “weak field” notch (by weakening the magnetic field generated by an electric motor, the efficency and speed of the same can be increased by around 25%), wich would save almost as much electricity as the 201 series.

The commission also examined the fields where the national railway was laking compared to other railways, and an another thing was found: stainless steel bodies, need little to no anti-corrosion maintainance compared to standard steel trains. Few additional improvements and finally the commission recieved an approval.
In just seven months a whole new train was desinged.

The 205 series was introduced in 1985 on the Yamanote line, to replace the 103 series in use since 1963 (fully replaced by 1988).
The stainless steel bodyshells were based upon the ones of the Tokyu 8090 Series of 1980, and the resistor control was nearly identical to the one used on 211 series trains, intrdouced at the same time as the replacement for 113 and 115 Series trains. Another modification from the 201 Series design were the headlights, wich were moved from the top to the center of the body, to enhance visibility durig nighttime. And most importantly, unlike their predecessor, they were designed from the start to be equipped with the analogue ATC system used on the busiest lines in Tokyo.

Far cheaper to produce than the 201 series, but with almost the same advantages, JNR may had found the solution that it was originally searching. But it was too late.

By 1986 the definitive decision to privatize and split JNR was passed by the Diet (the Japanese Parliment) and on the 1st of April 1987, JNR was dissolved and the new JR Group was founded.

JR East, the one stepping in charge of the railways from mount Fuji to the Tsugaru strait (wich included the Tokyo, Nagano and Niigata areas) found that the later JNR designs (205 and 211 Serieses in primis) were perfectly adequate for it’s needs, and as such continued their production, unlike all the other JR Group companies, wich had introduced a brand new design almost immediately (some even in 1988, less than a year after privatisation!).

Originally formed in 10-car sets, the Yamanote Line 205 Series sets were later lenghtend to 11-cars following the “Yamanote line ridership boom” of the early 1990’s. These trains were initially marked with a front sticker reading “11 cars”, but as the whole Yamanote line roster became 11-car sets, the sticker was eventually removed.

The additional car was specifically designed for rush hour as it had 6 doors (instead of the standard four) and folding seating, that was folded during rush hours and unfolded during normal times. Infamously known as “cattle-cars”, these were later introduced on many other Tokyo Area railway lines (both JR and private railways too!), altough they fell out of use by the 2010, as Platform Screen Doors were introduced.

Some of the withdrawn Yamanote Line 205 Series sets were repainted and transferred to the Keiyo Line , while others were refurbished and converted into 205-5000 Series trains with IGBT-VVVF control for Musashino Line services.

The opening of the Saikyo Line between Saitama and Tokyo, the urbanization of the Tama area and the growth of commercial buisnesses around Shinjuku, led to the “Yamantoe line ridership boom” of the early 1990s, when the ridership of the western section of the Yamanote Line skyrocketed to an unbearable 250% of it’s capacity, even worse than Today’s Tokyo Metro Tozai Line (wich runs at about 199% of it’s capacity).
By the 2010s, the introduction of lines specifically designed to relay the Yamanote Line (such as the Shonan-Shinjuku Line and Tokyo Metro Fukutoshin Line) lowered the overcrowding to an “almost normal” 190-200%.