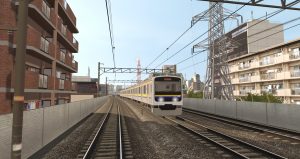 By the early 2000s services on the Boso Area were still primarily reliant on the JNR-era 113 Series, along with a minority of ex-Tohoku and Takasaki Line 211-3000 Series 5-car sets transferred to Chiba in order to replace the 113 Series sets that had suffered the most from saltwater bodysheel corrosion. Thus, to replace both on the Boso Area network (wich is formed of the Narita Line, Sobu Main Line, Sotobo Line, Togane Line, Uchibo Line and Kashima Line), a large number of 209 Series were moved to Chiba – a total of 62 Sets. These were shortened to 6- and 4-car sets and were fitted with new electric equipment, toilets, LED destination indicators, transverse seating and a new yellow and blue livery (based on the one of the Boso Area 211-3000 Series) at JR East’s Nagano Works between 2009 and 2013.
Numbered in the Cxxx range (C6xx for the 14 six-car sets and C4xx for the 48 six-car sets), all 62 sets were assigned to the Makuhari vehicle center, and entered service gradually from 2009, starting to replace both the 113 and 211-3000 Serieses, wich were both retired on all lines between 2011 and 2012.

Currently, the 209-2000 and 2100 Serieses are still the mainstays of commuter services around the Boso Peninsula, howerver in recent years, due to the declining ridership of some lines, new one-man-operation-capable trains were introduced in the form of the E131 Series, JR East’s first local-lines-dedicated purchase for the Tokyo Area. These quickly took up most of the off-peak services (and all services on the Kashima Line), resulting in a first round of 209 Series withdrawals, however a majority of 209 Series sets is still in service as of today, altough not for longer, as the final “30 years” lifespan date for this series is approaching.