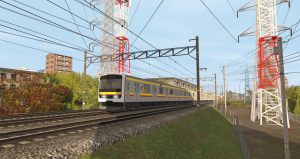 The other line to recieve withdrawn 209 Series trains from the Keihin-Tohoku Line was the Nambu Line, wich recieved three 209-2200 Series 6-car sets in late 2009. Unlike the 2000 and 2100 Subserieses for the Boso Area, the 209-2200 Series sets had changed little from their Keihin-Tohoku Line days, except for the LED destination indicator. These three sets had been introduced to supplement the existing Nambu Line fleet, wich was then formed of 205, 205-1200 and 209 (-0) Series sets. Entering service in early 2010, their tenure on the Nambu Line was quite short, as just a few years later, they started to be once more replaced by the E233 Series (togheter with the rest of the line’s fleet), specifically the -8000 Subseries tailored for the Nambu Line, wich entered service in October 2014.