Part of the “209 Series & derivatives” megapack –  jump to the previous part. 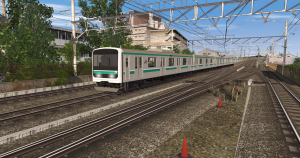 Ever since the late 1960s, the Joban Line services out of Ueno Station had been operated with two distinct types of rolling stock: 4-door “commuter-type” trains (either the 103 Series or Chiyoda Line trough-service stock) on “Rapid” services in the 1500v-only section between Ueno and Toride, and 3-door “suburban-type” 415 Series trains for AC/DC services beyond Toride. This arrangment had worked pretty well for nearly 30 years, as unlike the ever-expanding eastern and souther parts of Tokyo, Toride had remained the “northern” border of the “Tokyo Commuting Area” for several decades, however, this started to change in the late-1980s to the early-1990s, with an increase of commuters from cities such as Ushiku and Tsuchiura.

Originally, JR East considered re-electrifying part of the Joban Line north of Toride, so to easily extend the “operable area” of 103 Series commuter trains, but this was rejected on grounds of high costs. A much cheaper, and effective, solution was chosen instead: to build a multi-voltage 4-door commuter train.
Classified as the E501 Series, the new trains were based on the 209 Series, JR East’s then-lastest type of DC-only commuter train, using an exactly identical bodyshell and interior arrangment and decor. Instead, of course, the electrical equipment was completely changed: 20Kv AC 50Hz to 1500v DC rectifiers were fitted, motors geared for a higher top-speed of 120Km/h (compared to the 110 of the 209 Series) and most perhaps most notably, the Mitsubishi Electric-made traction Inverters (then-standard for most of JR East’s new trains) were ditched in favour of the iconic German-made “Singing” Siemens GTO-VVVF inverters.
Manufactured jointly by Kawasaki Heavy Industries and Tokyu Car Co. the first sets were completed in early 1995, but however couldn’t be delivered in time for the planned start of services due to the onset of the 1995 Great Hanshin Earthquake, wich severely damaged Kawasaki Heavy Industries’ Hyogo Plant in Kobe.

In the end, the first 10+5 car set of a planned initial order of four such sets (a grand total of 60 cars) entered service in December 1995, and was followed by the other three sets in early 1997.
Upon it’s entrance in service, the E501 Series was very well recieved by both railwaymen and commuters, being quieter and far more comfortable than either the 415 Series or the now-ageing 103 Series. However, an issue soon developed – while it’s true that the E501 Series had been designed as a commuter train, it had been designed too strictly as such, and hence lacked something fundamental for medium to long-distance services: toilets!
Hence, JR East opted not to proceed with further E501 Series orders, remaining with just four 10+5-car sets.

Due to their lack of toilets, in operational service, the four E501 Series sets were strictly limited to the busiest rush hour services only, such as the Ueno-bound trains departing between 06:00 and 07:00 from Tsuchiura Station, with the older 415 Series still operating all the other services.

In the end, a new proper 4-door multivoltage train suitable for long-distance commuter services had to be designed again, in particular to replace the now-seriously ageing 403 and early-batches 415 Serieses. The new trains came in the form of the E531 Series, introduced in 2005 and derived from the DC-only suburban E231-1000 Series.
Due to the fast-paced introduction of the E531 Series, with the timetable change of spring 2007, on the 18th of March, the whole E501 Series fleet was re-assigned to regional services north of Tsuchiura and on the Mito Line.
In 2012, 15 years after it’s introduction, the whole E501 Series fleet was refurbished, wich involved replacing most of the braking and electrical equipment, including unfortunately the iconic Siemens GTO-VVVF inverters (spare parts for wich had become unavaible as Siemens discontinued that particular model) being replaced by more efficient, but bland Toshiba IGBT-VVVF inverters.

Currently, all four 10+5-car sets are still in service, operating as 10-car sets on the Joban Line between Tsuchiura and Mito, and as 5-car sets on the Mito Line between Mito and Oyama. Depsite the small size of the fleet (and the fact that some sets are now 25 year old) there aren’t any plans to replace the E501 Series yet.

Trivia:
As part of the early campaign to extend Joban Line rapid services north of Toride, the Chambers of Commerce of Ushiku and Tsuchiura, togheter with elected Diet representatives from those electoral districts formed a “Temporary Alliance for the Improvement of the Capacity of the Prefectural southern secton of the Joban Line”, a pressure group whose main objective was to lobby the Ministry of Transportation (and JR East) into introducing a 4-door commuter train on “their” section of the Joban Line.