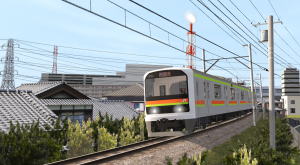 This little fleet of just two 4-car sets came to be in 2004, when Tokyo Area Waterfront Rapid Transit, the company operating the Rinkai Line, was re-forming it’s 70-000 Series fleet to standardize it’s trains to 10-car sets, in preparation for the commencment of full trough-service between the Rinkai Line and the JR East Saikyo Line. TWR went from five 6-car sets and five 10-car sets to a uniform fleet of eight 10-car sets, but in doing so, it ended up with four surplus cab cars and two surplus intermediate cars.

These six cars were purchased right away by JR East, wich intended to use them to replace the ageing 103-3000 and 103-3500 Series on the Kawagoe and Hachiko Lines. Initially, JR East planned to replace the older trains with seven 205-3000 Series sets, wich were to be converted from withdrawn 205-0 Series cars, however the sudden avaibility of much more modern ready-to-use rolling stock was a no-brainer, with JR East opting to convert only five 205-3000 Series sets, with the remaining two to be formed out of the ex-TWR cars instead. Furthemore, since the 70-000 Series was based on JR East’s 209 Series, familiarizing with the new trains would’ve been relatively simple, given that the Kawagoe and Hachiko Lines already used a small fleet of 209 Series trains: the 209-3000 Series.

The purchase of the surplus TWR cars was finalized in early 2005, with all six passing under JR East ownership. Re-classified as the 209-3100 Series, the ex-TWR cars were formed in two 4-car sets, one formed of all ex-Rinkai Line stock, and the other formed of the two cab cars sandwitching two newly-built intermediate cars, wich had been manufactured by Kawasaki Heavy Industries in March 2005.

Trivia:
The 209-3100 Series is the first, and as of today, one of the only two rare cases of a thrid-sector railway rolling stock being purchased second-hand by a JR Group company. The other case is JR Kyushu’s KiHa 125-400 Series, wich are ex-TR-400 diesel railcars purchased in 2005 from the closed Takachiho Railway.