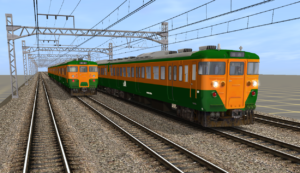 Upon it’s formation in 1987, JR West inherited a conspicuous number of 113 and 115 Series cars from JNR, including almost three quarters of the former’s fleet and around 600 units of the latter.

Unlike in the east, where the bulk of passengers was carried by the 103 Series (for the Tokyo Area) or by the 415 Series (for Tohoku Area Services), the 113s and 115s represented the backbone of passenger services in the Kansai Areas, on both mainlines and local lines, being JNR’s “vanguard” against the fiercely competitive major private railways (Hanshin, Hankyu, Keihan, Nankai and Kintetsu); as such, Kansai area 113s and 115s had a far higher “status” than their eastern counterparts.

Most of the 113s and 115s inherited by JR West were fitted in the Shonan Livery, with a minority being painted in special, line-specific liveries: the Fukuchiyama Line yellow-blue, the Hanwa Line light blue and white and the Kansai Main Line “Kasuga Red” livery.

To improve it’s image, JR West decided to change most of the 113 and 115 serieses’ liveries, starting from the higly disliked Fukuchiyama Line livery, wich was completely replaced by the “New Fukuchiyama Livery” in 1990.

By the late 1990s, JR West had spent most of it’s money to replace the most worn-out trains in it’s fleet (namely the 101 Series EMUs and the KiHa 35 and 52 DMUs), therefore it could no longer afford vast-scale replacements, but only very gradual ones. At the same time, most of the 113 and 115 Series fleet had already reached 30-odd years of service.

With no money left to replace them, JR West decided instead to refurbish them.

This program, called “N40” (or “a lifespan of 40 more years from the refurbishment”) was started in 1998, and involved the complete repairation of the bodyshell, the improvement of noise and heat insulation, the replacement of the passenger and the cab windows with newer ones made of a special type of reinforced glass, the reworking of the underfloor wiring, the repainting of the passenger compartment, the replacement of the old seats with newer ones (similar to those used on the 223 Series) and many, many more…

Finally, all the refurbished trains were to be repainted into a new livery, wich was to replace the iconic Shonan one (and also a few “line-specific” others). This new livery was sober but elegant, with a cream background with brown window bands and a thin blue line (JR West’s company colour) and it was soon nicknamed “Café Au Lait” by railfans.

Trains refurbished at the Hiroshima depot had their own livery variant: a white instead of cream background color.

From the early 2000s, as introduction of new trains designed to replace the 113s and 115s slowly but steadily progressed, the older trains were refurbished and displaced to less-utilized local and regional lines, such as the Obama Line, but in 2005, a serious accident brought back 113s and 115s to the Kansai area trunk lines: the Amagasaki Derailment.

The accident happened as a Fukuchiyama Line 207 Series had oversped trough a tight curve (the driver was trying to make up a few minutes of delay), derailed and crashed into a building.

The Fukuchiyama Derailment was caused by JR West itself, wich pushed the line’s schedule to the limit (the Fukuchiyama Line largely parallels and competes with Hankyu’s Takarazuka Line) and employs harsh penalties for those that fail to keep up to the those tight schedules. Furhtemore, the 207 Series involved in the crash wasn’t fitted with the ATS-P saftey system (nor were all the other trains in the same series), wich could’ve prevented the accident.

As an emergency mesaure, JR West took out of service the 207 Series fleet (and all the many other trains lacking ATS-P) to retrofit them, meanwhile recalling back the 113s and 115s that had been previously replaced, as they had already been fitted with ATS-P well before their displacement.

With such an emergency mesaure taken, JR West had to reform the recalled 113s and 115s in suitable-lenght consists, and it did, but completely disregarding the liveries; as such, for quite sometime, mixed consists of two, three and even four liveries were very common around Osaka.

As 207 Series trains retrofitted with ATS-P gradually re-entered service, the recalled 113s and 115s were sent back to the rural and local lines.

In the late 2000s, due to the introduction of several new train types, JR West decided to the reorganize and regroup it’s fleet of 113 and 115 Series trains to two areas: the Setouchi area (from Okayama to Hiroshima to Shimonoseki) and the Kyoto-Kitakinki Area (northwards of Kyoto).

Two new “monochromatic” liveries were introduced at the same time to uniform the look of the trains in the two zones: the Setouchi Area Yellow livery for the 113 and 115 Series and the Kyoto-Kitakinki area dark green livery for the 113 Series (the Kyoto area doesn’t have any 115s).

The two progressively replaced all the previous liveries, including the iconic Shonan one, with the last set repainted in 2017.

As of today, 113s and 115s only run in either of the two monochromatic liveries, and with JR West carrying out a massive replacement of the last remaining JNR-designed stock with the new 227-1000 Series, the retirement of both the 113 Series and of the 115 Series is just around the corner.