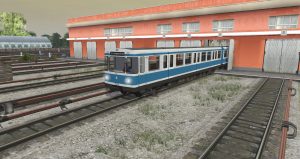 While the exchange of DT1 and Type A trains between Nuremberg and Munich had been rather common for the whole existance of both subway networks, this was always done as a temporary lending, with the veichles returned sooner or later to the original owner.

In 2003 however, the Nuremberg VAG opted to outright purchase six two-car sets from Munch’s MVG to cover a rolling stock shortage for the U-Bahn extension to the Airport (Line U2) and to Stadthalle (Line U1). The choice fell on three two-car sets of the newest batches, all fitted in the new white and blue livery.

The three trains were promptly shipped to Nuremberg, where they entered in service after a few minor, necessary modifications, namely the change of the destination indicator roller-blind curtain (using spare parts VAG had in stock for the equivalent DT1 Series trains), the removal of the Munich coat of arms and replacement with the circular Nuremberg city mark, and fitting of VAG running numbers and logos on the front and sides. All the rest remained identical to the original “Munich state” of the cars, including the original blue and white livery.

Due to various modifications Munich had made to it’s trains, the ex-Munich Type A (wich retained their designation in Nuremberg) were incompatible with the DT1s, depsite being of the same original design, and as such, the ex-Munich trains could not be operated togheter with Nuremberg’s “native” trains.

Some of the ex-Munich cars began to be repainted in VAG’s proper red and white livery in late 2000s, as the rolling stock shortage became less serious. However, the surplus of both DT1 and newer DT2 Series trains, thanks to the conversion to driverless operation of Line U2, interrupted this process, with VAG opting to retire the six two-car sets, wich thus ended their regular services in July 2009, being promptly scrapped right after their retirement.

Between the 4th of October 2006 and the 14th of October 2008, VAG had in it’s U-Bahn fleet a total of ten ex-Munich Type A two-car sets: six being the ones it had purchased in 2003, and the four other being four two-car sets lent from Munich during that period to cover the gap left by the refurbishment of the DT2 trains. Unlike the purchased Type A trains, the four lent trains were returned to Munich after enough DT2s re-entered service.

Trivia #2:
During the transfer trip from Munich to Nuremberg in 2003 (purchased cars) and 2006 (lent cars) as well as in 2009 for the return trip to Munich of the lent cars, the Type A sets were hauled on the German railway network by a Class 52 steam locomotive. This wasn’t a special occurrence or a “plandampf” train (a special timetabled steam train, something widespread in Germany), but an actual revenue run! The owner of the steam locomotive, the Franconian Railway Museum is registered as a full-fledged railway operator by the German Federal Railway Authority – they just answered the tender put out by the Munich MVG and Nuremberg VAG for the transfer of Type A trains – and won it!