Second part of the Taipei Metro Pack – jump to the previous or next part. 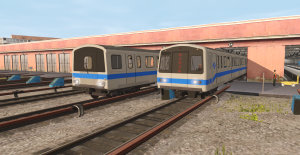 This peculiar train came to be in the late 1990s with the opening of the Xinbeitou Branch Line. This short line was originally (like the Tamsui Line it branches off from) a “full-railway” line operated by TRA with diesel railcars, shuttling between the old Beitou station (where the connection with the Tamsui Line, operated with loco-hauled trains) to the old Xinbeitou station.

The line was originally opened in the 1930s to link the termal resorts at Xinbeitou with the rest of the network, and operated in this way for several decades, until the late 1980s, with the start of subway construction. Original plans called for the Tamsui Line to be converted to rapid transit standards, and for the Xinbeitou Branch Line to be closed instead. However, due to popular demad from the people that lived in Xinbeitou, the plans were modified to convert the Xinbeitou Branch Line to rapid transit as well, as it still remained an important link for commuters.

Thus, as the Tamsui Line was built, the Xinbeitou Branch Line was built as well, opening togheter with the “main line” on the 28th of March 1997. The branch line was built with a double-track alignment and with (both) stations with platforms long enough for the standard “mainline” 6-car sets, as initial plans called for the branch line to be eventually integrated into the “main line” as a terminus for short-running trains (alas, those trains coming from the city center that didn’t need to go all the way to Tamsui to turn back).

As such, the line began operating as a shuttle with 6-car trains, but rather quickly the Taipei Metro offices were flooded with complaints – specifically due to noise: due to the tight curve radious of the line and it’s proximity to residential buildings, noise from the screeching wheels of trains quickly became unbearable. Various solutions were implemented, including the addition of noise barriers, reconstruction of the trackbed with insulating materials, reducing the frequency of the services (to a train evry 7-8 minutes), reducing opening hours (from 07:00 to 21:00) and finally shorten trains as well – having gave up on utilizing Xinbeitou Station as an additional terminus for trains coming from the city center, it was decided to keep operating the Xinbeitou Branch Line as an isolated shuttle, but as the passenger demand wasn’t high enough to justify the usage of 6-car trains, it was decided to run shorter trains as well.

There was only one issue – Taipei Metro had only bought heavy-rail trains that could be operated only as fixed 6-car sets.

A solution however was needed quickly, and instead of going trough a new tender process for the purchase of shorter trains, it was decided to take advantage of the fact that all Taipei metro trains are formed of two technically independent halves, able to function on their own, and thus utilize one spare set to form two 3-car trains to be used on the Xinbeitou Branch Line.

The choice fell on C301 Series set 013/014, wich was then split into it’s namesake “two halves”, sets 013 and 014. Once the train was split, a new cab end was fitted to the “former gangway” end of the two central carriages – in other words, the front was sealed and a new cab space was created by installing a partition wall right behind the first passenger door, along with the fitting of all the necessary equipment, such as driving desks, headlights and a centrally-placed square front window, for an interestly odd, rather crude and effective enough result.
The other “front” of the train, the original ones with the proper cab cars were left instead unchanged, save from the application of a sticker reading “Xinbeitou Train” on the front emergency door, to help passengers distinguish between the Xinbeitou Branch Line and Tamsui Line trains.

Right after being converted, both sets were put in service on the branch line, where they ran shuttling back and forth until 2007, when both were finally replaced by two dedicated 3-car sets ordered as part of the C371 Series, built by Kawasaki on the basis of the original C301 Series design wich it had built (togheter with URC) back in the 1990s.

After being withdrawn from the Xinbeitou Branch Line, the two halves were re-joined togheter, with cab equipment removed from the converted cab cars, returning to be standard intermediate cars. After the conversion works were “undone”, Set 013/014 was quickly re-introduced in service on the Tamsui-Xinyi Line, where it still runs, in one piece, to this day.