First part of the Taipei Metro Pack – jump to the next part. 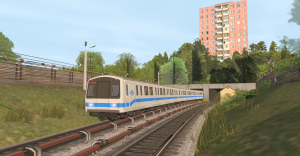 The C301 Series was introduced in the late 1990s as the first “heavy-rail” train for the Taipei Metro.

Tenders for the new trains, to be based on the C151 Series of the highly successful Singapore MRT system, wich was the inspiration basis for the Taipei Metro (wich is, interestingly, also known with the lesser-used “Taipei MRT” name, a likely nod to the original concept) were put forth in the late 1980s, after the masterplan for the metro had been approved.

Initial tenders called for  800 rail cars, for a total value of one billion US dollars, 2oo of wich (for a value of 200 milion USD) were intended for the Tamsui-Xindan Line, the first heavy-rail line of the Taipei metro.

In the end, after several tender changes, URC was selected over USTTG (now represented trough Bombardier as the owner of the Pullman factory) as the supplier for the first batch of 132 cars.

As part of the agreement between the various governments, agencies and manufacturers involved, the bodyshell assembly was carried out at Kawasaki’s own Hyogo plant in Japan, then the assembled bodyhsells were shipped to Port Elizabeth in New Jersey and then to Kawasaki’s Yonkers plant in New York, where final assembly of all necessary components (bogies, cabs, traction converters and electronics, interior fittings and so on) was carried out before the finished cars were shipped across the pacific ocean for a second time to their final destination, Taiwan. Overall, all the 132 cars (twenty-two 6-car sets) were built in a rather short time, roughly one year between 1992 and 1993.

The resulting train, classified as “C301 Series” (after the tender name – “Contract No.301”, coincidentally the same classification system used in Singapore) ended up as an interesting mix of the original Japanese design for Singapore, a 23,5m-long car type with four externally-mounted sliding doors, walk-trough gangways and a prominent front “de-trainment ramp”, but with several “distinctively american” fetaures as well, such as the semi-cross-seat internal arrangment with plastc bucket seats, cab equipment (such as the distinctive master controller with a “handle twist” deadman style) and thomlinson-type couplers.
Depsite part of the “losing” consortium, the two Westinghouse companies (both WABCO and Westinghouse Electric) also provided considerable amount of material to URC – all the braking and traction equipment respectively, and in the case of the latter, mainly a Westinghouse GTO-VVVF inverter, of the same type that would be later used on the New York City Subway R110A experimental train and on the TTC T1 Series of the Toronto Subway.

However, depsite the good product offering, for the following order for 216 cars, the DORTS (Department of Rapid Transit Systems, the bureau of the Taipei Municipal government that operates the Taipei Metro) choose Siemens and it’s single-bidder proposal over Kawasaki-URC instead, as it was unwilling to repeat the rather complex ordeal that came with coordinating manufacturing in two different countries, depsite the insistence of the US government.

After due testing, twenty-one out of the 22 C301 Series trains finally entered regular revenue service on the 28th of March 1997, with the opening of the first section of the Tamsui Line, later evolving into the Y-shaped Tamsui-Xindan-Zonghe Line (with trains running between Tamsui and Xindian or Tamsui and Nanshijiao) in 1999. The remaining 6-car set was split into two 3-car sets, 013 and 014, wich were subsequently put in service on the Xinbeitou Branch of the Tamsui Line, a short two-stations shuttle that branched off the Tamsui Line at Beitou and then ran to Xinbeitou. These two sets were eventually re-joined togheter in 2006, having been replaced by ad-hoc built 3-car C371 Series sets, and returned to service on the “main” Tamsui Line.

In 2012, the section between Guting and Nanshijao was absorbed by the Zonghe-Xinlu Line, with C301 Series trains ending their service on that section, and in 2014 the same thing happened with the section between Chiang Kai-Shiek Memorial Hall and Xindian, wich was absorbed by the Songshan-Xindan Line forming the current network. Thus, after 2014, all C301 Series trains were regrouped on the Tamsui-Xinyi Line, where they’ve been in service since then.

As of today, all 132 cars are still in service, and depsite nearing the 25 year mark, they’re still good as new. In fact, the only major modification carried out on these trains was the replacement of the Westinghouse GTO-VVVF inverters with Bombardier MITRAC IGBT-VVVF inverters, with the first half of the fleet (11 trains) undergoing this modification in 2013, and the remaining half in 2017. Other minor modifications were also made between 2011 and 2013 and involved the addition of side LED destination indicators, new air conditioning unit and smoke detectors.

Such keen interest in the Taipei metro on part of the United States was partly due to political pressure by the Regan administration due to the trading surplus Taiwan had with the US. In other word, at the time, Taiwan exported to the US more than it imported, resulting in a trade imbalance on the US side. Increasing exports to Taiwan (such as in the case of the Taipei metro cars) was seen as one way to reduce such imbalance.

Owning to the fact that these trains were first assembled in Japan, then shipped to New York and then shipped to Taiwan for final delivery, the C301 Series has been nicknamed the “train that travelled the world before entering service”.