Final part of the Taipei Metro Pack – jump to the previous part. 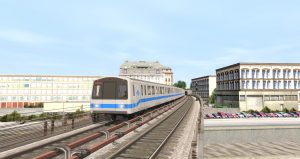 The C371 Series was introduced in the mid-2000s to provide for additional rolling stock for the various extensions to the heavy-rail lines then under construction, a phase that preceeded the general reorganisation of the network around the mid-2010s.

As was then the extablished praxis, a tender for the procurement of new trains was put forth in 2003 – the order was for a total of 321 cars, of wich 144 (twenty-four 6-car sets) intended for the “Y”-shaped Xinlu Line (one branch being the Luzhou Line and the other the Xinzhuang Line) wich was to eventually absorb the Guting to Nanshijao section of the Tamsui-Xindian-Zhonghe Line and the other 177 (three 3-car sets for the Xinbeitou and Xiaobitan Branch Lines and twenty-eight six-car sets) intended to add capacity to existing lines.

The tender was won by Kawasaki Heavy Industries, the builder of the original C301 Series trains from the system opening in 1997, thanks also in part to an agreement with TRSC (Taiwan Rolling Stock Co., Taiwan’s domestic rolling stock manufacturer) wich detailed that the manufacturing of the trains being split between the two companies.

Thus, with this agreement, part of a broader Industrial Cooperation Plan promoted by the Taiwanese Government, the first half of the trains were to be built entirely at Kawasaki’s Hyogo plant in Japan, while the remaining half was to be built as Complete Knock-Down kits* by Nippon Sharyo and then shipped to TRSC for final assembly.

For the new trains, classified as the C371 Series, Kawasaki took the original 1990s projects for the C301 Series and basically just dusted them off, updating a few things but overall leaving almost evrything as it was originally – including the bodyshell design and external appearance, wich was kept identical to the 1990s-built C301s!

Differences between the C301 and C371 Series are in fact minimal and the two serieses can be hardly distinguishable at first look, however, the C371s do feraure several different fetaures, namely electrically-operated doors (instead of air-operated ones), cab cars being fitted with fully longitudinal seating, and most notably a different traction system, in this case a Mitsuibshi Electric-made IGBT-VVVF inverter, identical to the one used on JR East’s successful E233 Series commuter trains, wich were being built at around the same time by Kawasaki, among others.

The first part of the C371 Series order was built entirely in Japan between 2005 and 2007 and included contracts TA001 (the bulk of the order, twenty-four 6-car sets), CH321A (a 3-car set for the Xiaobitan Line, to replace a 6-car C321 Series set), and CE361, with the latter being four six-car sets destined to the Bannan Line, as the upcoming extension to Nagang was nearing completion.

The first completed six-car set entered service in 2006, on the Xiaonanmen Line shuttle service, followed by the entrance in service of the two 3-car sets on the Xinbeitou Branch Line on the 22nd of July of the same year. Exactly one month later, on the 22nd of August 2006, regular revenue services for the C371 Series began on the “main” Tamsui-Xindian-Zhonghe Line, replacing the Siemens-made C321 Series, wich was transferred to the Bannan Line.

From 2012 to 2014, as the Tamsui-Xindian-Zhonghe Line was split into the current Tamsui-Xinyi, Songshang-Xindian and Zhonghe-Xinlu Lines, the C371 Series fleet was consolidated on the latter two, with the Tamsui-Xinyi Line fleet being standardized to the C301 Series instead. As of today, all C371 Series trains are in regular service, with their assignments unchanged since 2014: C371s make up the entirety of the Zhonghe-Xinlu Line fleet (as well as the two branch lines of the Taipei Metro network, the Xinbeitou and Xiaobitan Branch Lines) and also are the vast majority of trains in service on the Songshang-Xindian Line, with the remaining services being covered by their successor, the C381 Series.