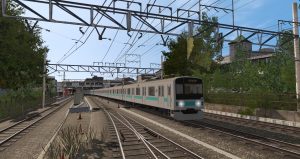 The 209-1000 Series was intrdouced in 1999 by JR East to cover an increase in planned trough-services between the Joban Line and the TRTA Chiyoda Subway Line made possible by an upgrade of the CS-ATC signalling system carried out a few months earlier.
Based primarily on the wide-bodied 209-500 Series introduced the year before, but with the narrow bodyshell (due to loading gauge restrictions) of the original 209-0 Series, the new trough-service trains, the first to have been designed by JR East since it’s formation as a company in 1987, entered service on the 4th of December 1999, when the additional trough-services were made operative. Since the increased services weren’t many, JR East ordered only two 10-car sets, both of wich were manufactured by Kawasaki Heavy Industries.

Overall, the 209-1000 Series is very similar to the “above-ground” 209-0 Series, except for the necessary modifications needed to make these trains compliant with subway regulations, of wich the most prominent fetaure is the requirement for a front emergency escape door, wich on the 209-1000 Series also houses a short ladder.
Another tell-tale difference was in the livery – per uniformity with the 203 and 207-900 Series (the other two types of Chiyoda Line trough-service trains of JR East), the 209-1000 Series doesn’t have the small colored band above the passenger windows, wich is instead a fetaure of all of JR East’s other stainless steel commuter trains.

For trough-services, the 209-1000 Series was of course fitted with signalling and saftey equipments compatible with both JR East’s and TRTA’s (and later Tokyo Metro) CS-ATC system, but not with Odakyu’s OM-ATS, therefore these trains weren’t allowed to run on the Odakyu Odawara Line (the other line that had trough-services with the Chiyoda Line) and as such were limited to services between Toride and Yoyogi-Uehara only.

The two 209-1000 Series set lived a relatively uneventful life for more than 15 years, with the only notable change being the replacement of the square pantographs with single-arm ones in 2014; however, a major development came in 2016, with Odakyu railway and JR East finally setting up the framework for trough-services between their respective networks, wich implied installing equipment compatible with the other’s saftey system on their respective trains. Since JR East’s E233-2000 Series, the replacement for the older 203 and 207-900 Series introduced in 2009, was already predisposed to recieve it, there were little to no problems in carrying out those modifications. On the other hand, the 209-1000 Series required extensive modifications, with JR East opting not to fit the two sets with Odakyu’s saftey system, and as such, when Odakyu-JR East full trough services began in 2016, the two 209-1000 Series sets were “left out”, still being unable to proceed further than Yoyogi-Uehara station, and thus becoming somewheat of a burden. Hence, in 2017 JR East choose to order an additional E233-2000 Series set to replace both 209-1000 Series sets, in order to finally have an uniform trough-service fleet.