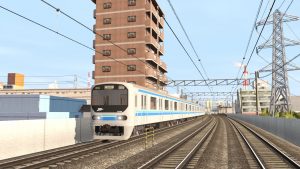 The 70-000 Series was introduced in 1996 to operate services on the newly-opened Rinkai Line (then still known as the “Rinkai Fukutoshin Line”) a mostly underground rapid railway line serving new developments on the reclaimed islands of Tokyo bay, primarily Odaiba. Since the line was already being built with trough-services with JR East in mind, Tokyo Waterfront Area Rapid Transit, the owner company of the Rinkai Line, decided to order rolling stock based on JR East’s designs.

The definitive choice obviously fell on the 209 Series, then JR East’s new commuter train, with TWR ordering a direct derivative, classified as the 70-000 Series.
These new trains were to be virtually identical to JR East’s 209 Series, using the same bodyshell, bogeys, pantographs, Mitsubishi Electric GTO-VVVF inverter, driving cabs and other technical equipment, with the main (and almost only) tell-tale difference between the two serieses being the front FRP mask design, wich was given a rather pleasant rounded design instead of the flat one of the 209 Series.

Manufactured by Kawasaki Heavy Industries in 1995, the first four 4-car sets (numbered Z1 to Z4) of the 70-000 Series entered service with the opening of the first section of the Rinkai Line, between Shin-Kiba and Tokyo Teleport, on the 30th of March 1996.
An additional fifth 4-car set (Z5) was delivered in 1999 to increase the number of avaible trains. This was followed by a sixth set (Z6) in 2001, bought for the opening of the one-stop extension of the line to Tennozu Isle.

With the opening of the extension of Osaki, wich completed the Rinkai Line, and the subsequent commencment of trough-services with the JR East Saikyo Line in 2002, the whole fleet began to be extensively reformed: out of the six avaible trains, the first five were lenghtened to six cars, and the sixth one was lenghtened to ten cars. At the same time four newly built 10-car sets were also delivered to the line, bringing the total to five six-car sets (to be used on Rinkai Line-only services) and five 10-car sets to be used on JR East Saikyo Line trough-services.

With the re-organization of Saikyo and Shonan-Shinjuku Line services using the Yamanote Freight Line in October 2004, new “slots” were opened for more Rinkai Line trough-services, thus TWR proceeded to further reform it’s fleet, bringing all the remaining six-car sets to ten cars.
However, since all services to be operated on the Rinkai Line were to be trough-running trains, the number of necessary minimium trains to cover all services decreased, from 10 to eight (this is because with non-trough-running services TWR needed to cover all Rinkai Line service with it’s own stock, while with trough-running, part of the work could also be done by JR East trains). Thus, after the reformations were done, TWR ended up with four surplus cab cars and two surplus intermediate cars (the other cars of these two former sets having been used to lenghten other trains), wich the company promptly sold to JR East, for use on the Kawagoe and Hachiko Lines as the 209-3100 Series.

After the tumultuous reformations, the situation has remained roughly the same to this day, with TWR owning eight 70-000 Series formed as 10-car sets. The whole fleet is assigned at Yashio Depot, wich is located on Tokai Island, right beside JR Freight’s Terminal. The only major modifications to have been carried out relatively recently have been the ongoing replacement of GTO-VVVF inverters with IGBT-VVVF ones, and the fitting of ATACS equipment to all trains in 2015, necessary due to the conversion of the Saikyo Line to said signalling system.

The 70-000 Series is now well over 25 years old, and TWR has hinted a few times at a planned replacement of the fleet, however due to the company’s financial constraints we can safely assume that the 70-000 Series will continue to run on the Rinkai and the Saikyo Lines for the forseeable future.

Trivia #1:
The peculiar “70-000 Series” name (wich is to be pronounced as “Seventy-thousand” according to official TWR documents) was choosen as Odaiba (and by extension the Tokyo Waterfront City), the area to be served by the Rinkai Line, was to be the 7th subcenter of Tokyo metropolis (the other six being Ikebukuro, Shinjuku, Shibuya, Ueno/Asakusa, Kinshicho/Kameido and Osaki).

Trivia #2:
Coincidentally, the 70-000 Series designation uses a system similar to the Toei Subway 10-000 Series: The “70” refers to the series designation, the first two digits after the hypen indicate the formation number and the last digit indicates the car number inside the set (with cab cars being 0 and 9).

Triva #2:
Before the opening of Yashio Depot in 2002, to undergo scheduled heavy maintainance and routine inspections, 70-000 Series sets had to be forwarded to the Tokyo General Rolling Stock Center (located near Osaki station), taking a slightly circuitous route around Tokyo: Keiyo Line from Shin-Kiba to Soga, then the Chuo-Sobu Line to Ochanomizu, then the Chuo Rapid Line to Shinjuku, and then finally the Yamanote Freight Line all the way to Osaki.

Light maintainance and checks were instead performed in the unopened portion of the tunnels towards Tennozu Isle.

Trivia #3:
Depsite the Rinkai Line being almost entirely underground, it isn’t legally considered as a subway line, and as such the front emergency doors (mandatory on subway trains) aren’t required on the 70-000 Series.

A very early illustration of the proposed Rinkai Line trains, dating from 1991 (when the line’s construction hadn’t even began yet)… 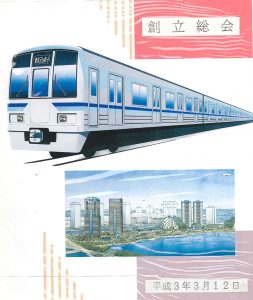 …and a slightly more recent version – here the design is nearly finalized, with the only notable differences with the actual production version being in the headlights design and in a few livery details. 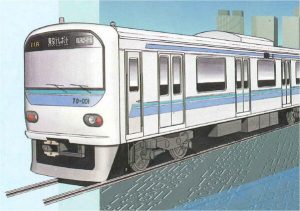