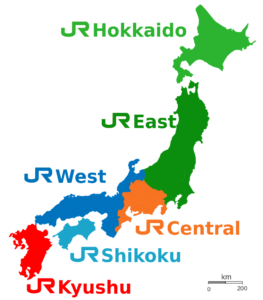 The reigonal “jurisdictions” of the six passenger JR companies. JR Freight is a nationwide company and thus operates in all six areas.

The JR Group consists of the seven companies that took over the assets of the Japanese National Railways when they were privatized in 1987. It’s formed by six passenger-only companies, each with it’s own “regional jurisdiction” and a nationwide freight company.

It operates the majority of railway services in the country, with an extensive 17300 Km-long network made up of 1067mm narrow-gauge lines electrified either at 1500v DC (between Tokyo and Shimonoseki), 20Kv AC 50Hz (north of Tokyo) and 20Kv 60Hz (Kyushu and the Hokuriku Main Line in JR West’s territory) plus 2700 Km of fully-independent standard-gauge high-speed “Shinkansen” lines connecting Shin-Hakodate in the south of Hokkaido to Kagoshima in the southern tip of Kyushu.

Out of the six passenger companies, three (JR East, JR Central and JR West) operate portions of the network on Honshu, Japan’s main and biggest island, and the other three (JR Hokkaido, JR Kyushu and JR Shikoku) operate the entirety of network on their respective islands.

The “passenger” JR companies also own and are responsible for the maintainance of their respective networks. JR Freight does not own any track (except for it’s freight yards and depots) but operates nationwide seamlessly on the tracks of other JR companies.

The JR network also includes two undersea tunnels (the Kanmon tunnel between Kyushu and Honshu) and the Seikan Tunnel (between Hokkaido and Honshu), world’s longest tunnel with an undersea segment (the Channel tunnel between Dover and Calais is shorter but has a longer undersea segment) and the Seto-Oashi Bridge (between Honshu and Shikoku), one of the world’s longest combined road-rail bridges.

Also part of JR group are two companies that do not operate any railway service: RTRI, the “Railway Technical Research Institute”, wich conducts most of the research and development in the field of railway transportation in Japan and “JR Systems”, the entity wich manages the communication and IT services (such as the seat reservation systems) on behalf of the whole JR group.

From a railfan wiewpoint, depsite being part of the same group, each JR company is very well distinct and independent from the others, with it’s own unique and distinct identity, both in rolling stock design (for example, JR Kyushu’s flashy liveries compared to JR West’s sober ones), operational and commerical attitudes and overall “feel” of the network.

Depsite being nominally “privatized”, the Ministry of Transportation (via the Japan Railway Construction, Transport and Technology Agency) still fully owns JR Hokkaido, JR Shikoku and JR Freight. Furthemore, the rest of the JR companies weren’t fully sold to the public until long after 1987 (JR East became the first fully privatized JR Group company only in 2002, followed by JR West in 2004, JR Central in 2008 and JR Kyushu in 2016), and even after the full-privatization, the Japanese Government still retains a huge influence over the JR Group as a whole.